Thank you for your on-going support of the RNC Alliance and its focus on restoration for the benefit to the economy, the environment and man. Please see the following:


Watch for updates from other regions.
Enjoy the read!

The past year was hugely eventful and productive for the development, communication, upscaling, and political integration of both RNC, and holistic restoration, as we define it. Here, we report on an exciting new collaboration with one of the three UN Rio Conventions launched in Rio de Janeiro, back in 1992 – that addresses climate change, desertification, and biological diversity.

Now for the Good News from Hyderabad

In October 2012, the UN Convention on Biological Diversity (CBD) held its 11th Conference of the Parties (COP11) in Hyderabad, India. This historic meeting was attended by over 8,000 delegates from 193 countries. During the opening plenary, India announced the “Hyderabad Roadmap” intended to guide the efforts of all 168 signatory countries in achieving the 20 Aichi Biodiversity Targets in the Strategic Plan 2011–2020 agreed to in Nagoya, Japan in 2010. Of these, Targets 14 and 15 set out ambitious but attainable goals for scaling up efforts to restore and rehabilitate degraded ecosystems and landscapes around the world. During COP11, Sasha Alexander and James Aronson helped organize Ecosystem Restoration Day at the Rio Conventions Pavilion, a series of events held at each of the Rio Conventions’ respective COPs, with the aim to promote greater synergy and leverage their respective assets. In addition, the CBD COP11 approved Decision XI/16 on Ecosystem Restoration to guide its future work. For a summary and analysis of the Hyderabad outcomes regarding ecosystem restoration, see:

Aronson, J. and Alexander, S. 2013. Ecosystem Restoration is now a global priority: Time to roll up our sleeves). Restoration Ecology 21 (3). 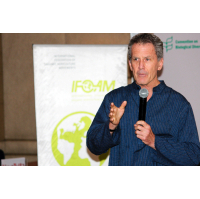 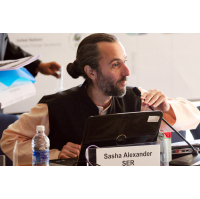 Images from the Rio Conventions Pavilion.

In the run up to the CBD COP11, Alexander and Aronson coordinated an international expert group to research and publish three Information Documents (17, 18, and 19) on ecosystem restoration for the CBD Secretariat, which were distributed to the Parties and other relevant organizations. These included over 800 pages in total documenting the available restoration guidance, tools, technologies and terminology to guide and inform countries and communities as they pursue a series of very ambitious goals for the next ten years, including the restoration of at least 15% of the world’s degraded ecosystems. We are happy to report that the pragmatic approach to restoration espoused and promoted by the RNC Alliance is firmly reflected in the Hyderabad call, just as it is in the reports of the UN project, The Economics of Ecosystems and Biodiversity. See the following two chapters:

Time will tell how widely and quickly actions follow; but we are hopeful following this good news from Hyderabad. Furthermore, we are now in process of submitting an article on a new global target proposed by the UN Convention to Combat Desertification (UNCCD) at Rio+20 which outlines the important role of restoring natural capital and a number of key messages as they begin to define and implement a Land Degradation Neutral World target. Alexander and Aronson were joined by veteran restoration scientist/practitioners Oliver Whaley, Royal Botanic Gardens, Kew, and Kingsley W. Dixon, King’s Park & Botanic Garden, Perth in co-authoring this article.

Two additional RNC publications we would like to bring your attention to are:

In these articles and others, we discuss the relevance of RNC-thinking to restoration and related activities in terrestrial, coastal and marine environments. The marine focus is new, and indeed Aronson was delighted to be invited to join a truly interdisciplinary group addressing for the first time the prospects and role for ecosystem restoration in deep sea ecosystems. More news and links to this work will be forthcoming shortly. For the time being, a new publication presents a detailed case study showing how the RNC approach and holistic restoration tools can be applied to a complex situation surrounding a large coastal lagoon in southern France.

Finally, a strong link has now been established with the Ecosystem Services Partnership (ESP), a global network devoted to promoting and enhancing the application of the ecosystem services approach to management and restoration issues around the world. Aronson and Alexander were named ESP Thematic Working Group Leads for Restoring Ecosystems and their Services . Together, they are organizing a Special Session and Workshop on the nexus of ecological restoration and the rapidly emerging ecosystem services concept for the 6th ESP Conference to be held in Bali, Indonesia on August 26-30, 2013. Contributed papers from these sessions will appear in special issues of Ecosystem Services and Landscape Ecology. The link between the RNC Alliance, ESP and IUCN is further strengthened as RNC members Emmanuelle Cohen-Shacham, Sasha Alexander, and Dolf de Groot now form the lead team for the IUCN’s Commission on Ecosystem Management Thematic Group on Ecosystem Services .

Upcoming Conferences in the Americas

Aronson is preparing a plenary talk on RNC for the upcoming Latin American restoration conference in Bogota, Colombia (www.congreso2013.redcre.com) in July 2013, and will participate in the 25th Conference of the Society for Ecological Restoration, to be held in Madison, Wisconsin, USA, in early October 2013 (www.ser.org/programs/world-conference).

The new second edition is a thoroughly rewritten version of the well-received first edition. To a large extent, the second edition qualifies as a new book, but the original title was retained to underscore topical continuity. Two new chapters were added. The Virtual Field Trips (case histories) are all new and describe projects from five continents. The photographs are new. There are many new references. The Four-Quadrant Model of restoration values was significantly amplified.

Controversial topics were added, such as:

•   why novel ecosystems shouldn’t serve as ecological references;
•   how the gap between practitioners and restoration ecologists occurred;
•   how restoration specifically addresses climate change;
•   why there’s disagreement over the limits of what’s called ecological restoration;
•   why restoration practice remains more knowledge-based than science-based.

Ecological restoration, of course, is a key component of many RNC in initiatives. The new edition describes RNC as a programmatic activity performed at a landscape or bioregional level, whereas ecological restoration is an ecosystem-level initiative concerned with augmenting the stocks of local natural capital in RNC programs.

Andre Clewell devotes much of his time towards promoting ecological restoration by presenting workshops (Principles of Ecological Restoration and Their Application) for the U.S. Army Corps of Engineers and at scientific conferences. He gave this workshop at the Universidad Austral de Chile in Valdivia in 2012, where the first edition of the Clewell-Aronson book is used as a text in that university’s ample curriculum in ecological restoration. Clewell travels to Chile in April, 2013 to present his workshop at two more universities and to personnel in the Chilean Ministry of the Environment. For additional information, see www.andreclewell.com . Clewell continues to serve on SER’s committee that is developing a professional certification program in ecological restoration practice.